Back To Our Roots - The Local Food Movement Via Film Fest

Tractors?! We don't need no stinkin' tractors! (Actually, they do, I'm just being smart)

Spent an enjoyable Monday evening at the Cleveland International Film Festival, viewing a production about local food, food economics, food politics, food production, and beer. The beer aspect was thanks in large part to the sponsorship of the Great Lakes Brewing Company, who also play no small role in the film itself. Poly Cultures: Food Where We Live, is a seven chapter story about the important role of locally grown crops, and the policies, legislation, and people who are working in support of them.

One segment focuses on Hale Farm & Village, a replica 19th century town set within the beautiful Cuyahoga Valley National Park. It has a small farm (hence the name). And on this farm they had some weeds, e-i-e-i-0.... So, along comes the ever-ecologically minded Conway brothers from GLBC, and presto! The 'Pint Size Farm' has suddenly sprung to life; producing a large amount of produce for the company's restaurant in Ohio City. According to Christine

On a side note, Katie and I were pleasantly shocked when who should appear in the film but... us! Though only for a moment, and from a distance, we enjoyed approximately 3 seconds of our promised 15 minutes of fame. Along with the Ohio State Fair Watermelon Seed Spitting Contest in which I placed second in 1989, that leaves me with about 13 minutes and 42 seconds. 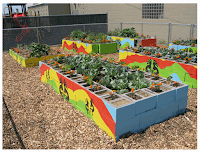 communities, and this, along with City Fresh, have begun to put theory into action. Kudos to the filmmakers, Tom Kondilas, Brad Masi and David Pearl, for shining a light on the people and organizations who are helping to: bring quality produce to the inner-city, utilize organic farming techniques to produce their crops, re-use and recycle waste to 'close the circle' from growing to garbage, and generally promote community development through creation of neighborhood gardens and garden clubs. The city of Cleveland is a better place because of every single person involved with Poly Cultures.
Posted by Jay at 1:04 PM